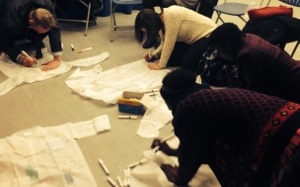 Teachers take part in an Inset at Discover Children’s Story Centre where they got to taste an Actor Interruption first hand.

I have been running quite a few teacher insets of late through @Discover_Story sharing some practice that we’ve developed through the Catching Words project and the Discover Children’s Story Centre Summer school which had it’s debut this summer. Tonight I shared some of the exercises I ran at the summer schools this summer and here they are for you..

A name we’ve coined for having an actor burst in on an unsuspecting class as a character from a book. We did this several times during the summer school but went to great lengths to create the illusion of reality. The actors hid from the children throughout the day so that they were only seen when we intended them to be seen. All the adults were in on the ruse and we created realistic scenarios for the characters to enter into. Our first Actor Interruption was based on Frank Cotteril Boyce’s “The Unforgotten Coat” a tale about a school girl (Julia) who becomes the ‘good guide’ of two Mongolian Brothers new to her school. She takes them under her wing but soon discovers there is more to them that meets the eye pand that she must protect them from the demon that makes things disappear! Actor and theatre maker Laura Mugridge played Julia bursting in on the class and relating that she was looking for two Mongolian brothers. We had already given the children the book so it didn’t take long for some of the children to realise that she was a character from the story. Julia left as suddenly as she had arrived- I pursued her (in the name of believability) and returned with some disposable coats. The children were brimming with questions and theories so I invited them to put their thoughts onto the disposable coats with pens and crayons which they did with pictures and sentences. At the end of the session we had a sharing/cat walk as students donned their coats and divulged their theories.

On the second day we arranged another Actor Interruption utilising Laura’s skills again. At the start of the session I received a phone call from an adult known to the children (the head of the summer school) I spoke on the phone within ear shot of the children relating my surprise that a child had been seen wondering the school grounds in a fur coat! I loudly counted the children in my class and fed-back down the phone that “No we did not have any children missing” I then left the room without word, only to return moments later to ask the children a question… “There is a boy in a fur coat downstairs- I can see him from the stair well but don’t know who he is, maybe you guys will recognise him?” I led the class to the stair well where they could see the floor below and a young boy in a large fur coat with his hood up (to disguise the actor Laura) playing with some strange objects. The children had theories and exclamations of surprise-“it’s the boy from the book” some exclaimed “the one Julia was looking for” others realised. I led the class back to their room and headed out again to “investigate” this time I returned with the boys fur coat, pockets bulging with the objects he was playing with. The coat was laid down on the floor, the objects placed on top. The class were invited to come and handle and explore the objects and then to write in their own personal journals (given to them on day 1) what the objects were, who they belonged to, what they used for, and how they ended up in the school! The students wrote and talked excitedly throughout the lesson and well into break- referring to the book ‘The Unforgotten Coat’ to back up references and claims.

On the last day of the week the children had another visitor. By now some were becoming wise to our scam, some students had come in very early and spied the actors as they arrived, others believed that they could tell that the adults were lying/acting. All the adults involved ensured that they did not deny anything, we wanted to respect the children’s intellect and even went as far as subtly congratulating them with a wink and a nod if they figured things out. The key was to strike the balance between creating a ruse but keeping the environment safe with an air of play- there had to be just as many opportunities for the children to disbelieve us as there were for them to believe us. Our visitor on the last day was The Immigration Officer from the book- a character also know as ‘The Demon that makes things disappear ‘ the officer had questions for the children… “Have you seen a boy in a fur coat?” “It’s important I speak to them?” etc. the children did not waste any time in dobbing on the boy however once the immigration Officer left some did wonder whether that had been the right thing to do. Once again there was much checking of the book and many theories shared- I then asked them about a specific part in the book where the brothers make a dough boy to confuse the demon- the children found the relevant section – despite having not necessarily have read the book. I invited the children to write their own recipe for a dough boy, a dough boy that would confuse a demon. We ended up with recipes that included “a spoonful of bravery” and “a dollop of snot” -how else would one make a small boy.

The Actor Interruptions were very successful in getting a group that traditionally struggled with texts to engage with story. The sessions occurred in a context where there were lots of references to the book in other sessions (not just the Actor Interruption sessions) so students created drama pieces based on aspects of the book, took part in specific literacy exercises based on the book and even arts and crafts projects, however we never insisted that the children read the book. Secretly we were hoping that every child would be impelled to read the book cover to cover- this did not happen (a fact which throws up many questions of its own) but every child could confidently relay the story and knew the characters extremely well- one could argue that they knew the story better than someone who had just read it.

Ultimately Actor interruptions are not meant to replace the reading of a book however as a means of bringing a text to life and giving students that traditionally struggle with reading and writing access to the written word, Actor Interruptions are an essential tool.

Have you used similar techniques in your school? Would you like to? Share your experiences and thoughts below.